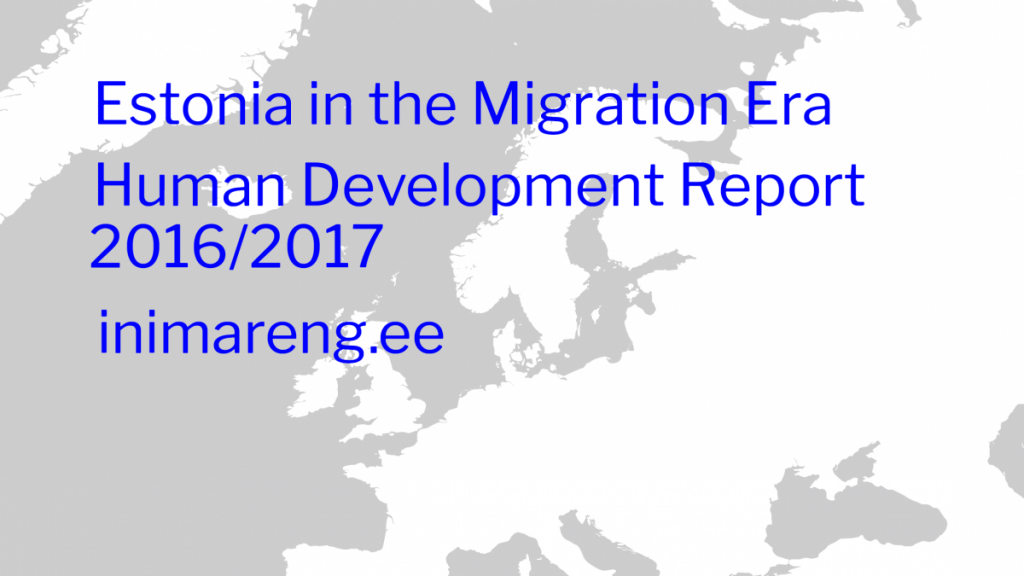 Human Development Report 2016/2017 “Estonia in the Age of Migration” is readable online in both Estonian and English on www.inimareng.ee/en.
Main messages of the report are available also in Russian.

Follow the news related to the Human Development Report here.

At the end of 2015, the Estonian Cooperation Assembly dedicated the theme of the 2016/2017 Estonian Human Development Report to the global Estonian identity, along with its nature, extent and impact on the development of Estonia and its nationhood. Two drafts were submitted for the tender to fill the post of the editor-in-chief of the report, and the Council of Cooperation Assembly has chosen the draft submitted by Tiit Tammaru, professor of population and national geography, along with co-editors Raul Eamets and Kristina Kallas. Their submission dealt with the global Estonian identity through the impact of cultural migration, demographic processes and socio-economic developments.

In a press release, Tiit Tammaru, editor-in-chief of the report, explains the theme in more detail: “Challenges connected to migration are real all across Europe. In addition to the migration crisis, living, working or studying for a shorter or longer period is more and more prevalent in other countries. Along with the co-editors, I would like to contribute to the emotive debate over migration and changing Estonian identity, and help channel it into a calmer form. In the Human Development Report, we would like to explain the changes that are occurring to Estonian migration and discuss what kind of lingual and cultural effects it brings”.

In August 2016, the Council of Cooperation Assembly approved Olari Koppel as a reviewer of the report; Koppel has a rich editing experience and is the head of the office of Chancellor of Justice.   He was chosen due to his previous work as an editor and head of the Cooperation Assembly, which proves his work experience in publishing previous human development reports and will assure the high quality and credibility of the Human Development Report 2016/2017.

By the end of 2016, the manuscript draft of the report was prepared and stringent editorial work of the articles is currently being carried out. According to the reviewer, the report, which will appear at the beginning of June 2017, will contain many original messages that provide a comprehensive overview of the difficulties and further opportunities for Estonia in relation to diversifying migration.